Dear reader, there is far more to say than I can type in these first days after my visit to Büchel. Because I promised some people to publish soon, be aware that as long as this first line is here, I might still update this text further, or the might be subsequent blogs. Check this blog again in some days, or weeks.

Last week I visited Büchel Peacecamp. Located at a tiny spot in the corner of three roads, a diverse and changing group of international activists resists the presence of USA nuclear missiles on European soil among which those stored at Büchel Airbase. I made a typical last minute decision to join some friends of the Amsterdam Catholic Workers organisation on their second (annual) visit to the camp. Being unconnected to any of these two scenes – Anti-Nuclear Activism and Catholic Workers – it was going to be an improvised archaeological adventure. Archaeological, because indeed that would be the nature of my game. Inspired by works like Colleen Beck’s (et all) work at Nevada Peace Camp, Attila Deszi’s work on Wendland protest camp and the work of research friend Marjolijn Kok at the Occupy Movement this was a chance to see how I could contribute as an archaeologist. But contribute to what exactly? In general archaeology of activism is motivated by the idea that formal state archaeologies seldom record the stories and material culture of those who resisted the governmental course. The archaeology of activism is a way of recording counterheritage and perhaps countermemories of things and events that might otherwise be unjustly forgotten – I purposely avoid the word ‘histories’ to avoid the misconception of archaeology as historical practice.

This was the whole plan in a nutshell. I scrambled together some paper, pencils, measuring-tapes and artefact bags – without knowing whether I would actually need any of these – and headed towards the tiny town of Büchel in the German Eifel region. In this blog series I will describe some of my observations from a subjective starting point, with no intent to be complete or to deliver a final analysis. To be honest, the whole experience was quite overwhelming for someone who often thinks in activist language, but seldom can be found on the scene where not-amused authorities have to be faced on a daily basis. And to be even more honest: although I intensely support pacifism, I am not sure – yet – if a revolutionary instant abolishment of this hell-on-earth-atomic-devices would deliver sustainable results as long as impulsive or power driven people like Trump or Putin still rule nuclear countries…

When we arrived in the evening that Thursday of July 11, it was too late for a thorough briefing and we went almost straight to bed in our hastily erected tents. “Blockade at six” was the only thing we were told that night. At 6.10 AM the next morning my friend and I hurried from the quiet camp to the Fliegerhorst Büchel Main Entrance a hundred meter 100 m eastward up the road, where the protest had already commenced and we had our first taste of how activism is not at all the pleasant countryside camping experience which it may seem at first glance. A dozen or so protesters had occupied the roundabout just in front of the airbase Main Entrance and some other were doing a ‘sit-in’ in front of the main airbase gate, preventing cars from leaving and entering. “When people are blocking the gate, the soldiers are instructed not to open it”, so I was told by a bystander. The materiality of the human body in itself is here an effective tool of protest.

The chosen time was deliberate as this was the hour when the military changed shifts and hundreds of vehicles had to both leave and enter the base through its three entrances, the main, north and southern gates. Police officers were smoothly guiding the sometimes visibly annoyed base-personnel and their cars away from the roundabout to another gate, where – as we learned later – police had prevented other activists to reach the fence. When my friend and I approached the scene, the outside line of the asphalt of the roundabout felt almost like a physical barrier.  The difference between our ‘safe’ corner opposite of the protesters, and the grassy centre of the roundabout where the activists were holding their signs was palpable. “If we cross this line we are in, we take part, and there might be consequences.” Only later it became clear to me that ‘in’ and ‘out’ were very much a fantasy of mine in the eyes of the other party. Although I, as a visiting archaeologist, felt at that point far more an outsider,  an observer and recorder of the events and materiality, for the police and military I simply came from the camp, and therefore was an activist no matter what I did. One might say my physical presence at the ‘archaeological site’ meant inherent association to its meaning. The camp people perceive this quite differently. For them there are internal differences in subgroups, like supporters – who do basic organisational chores like cooking-, visiting friends, independent activist groups and..in this case… one archaeologist and one German documentary maker. 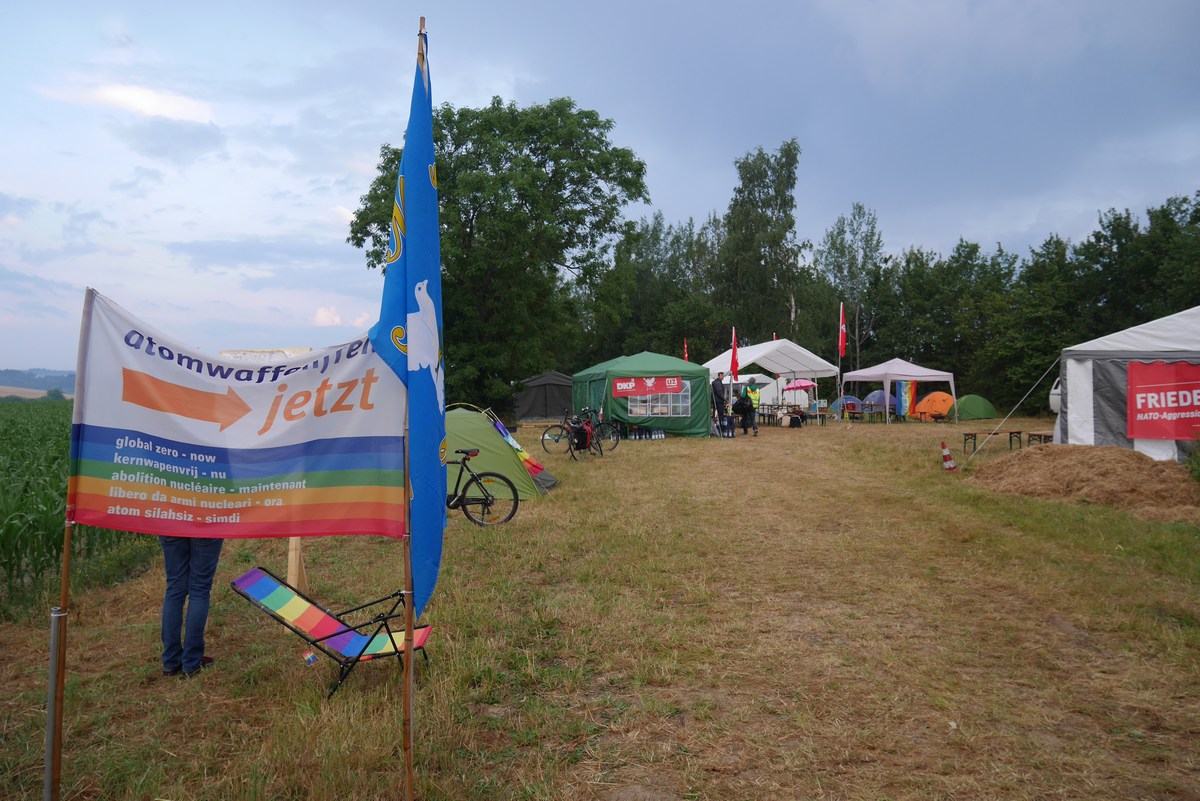 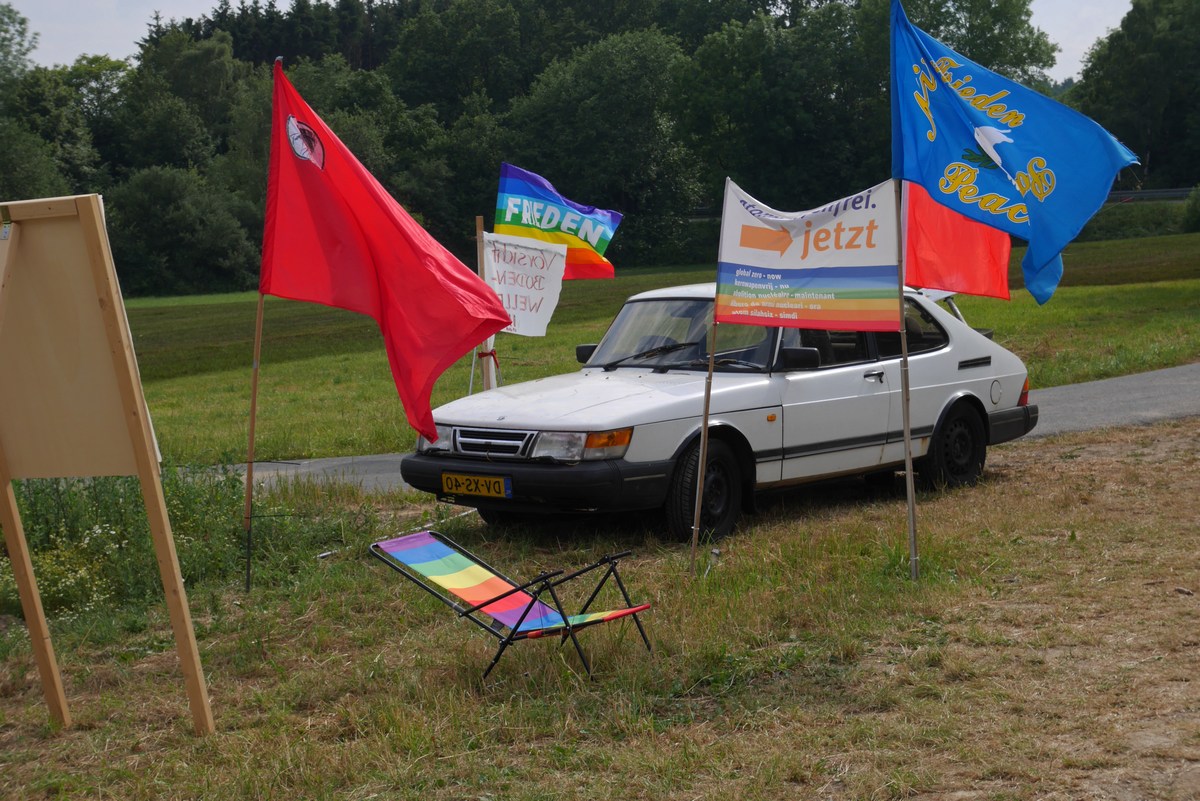 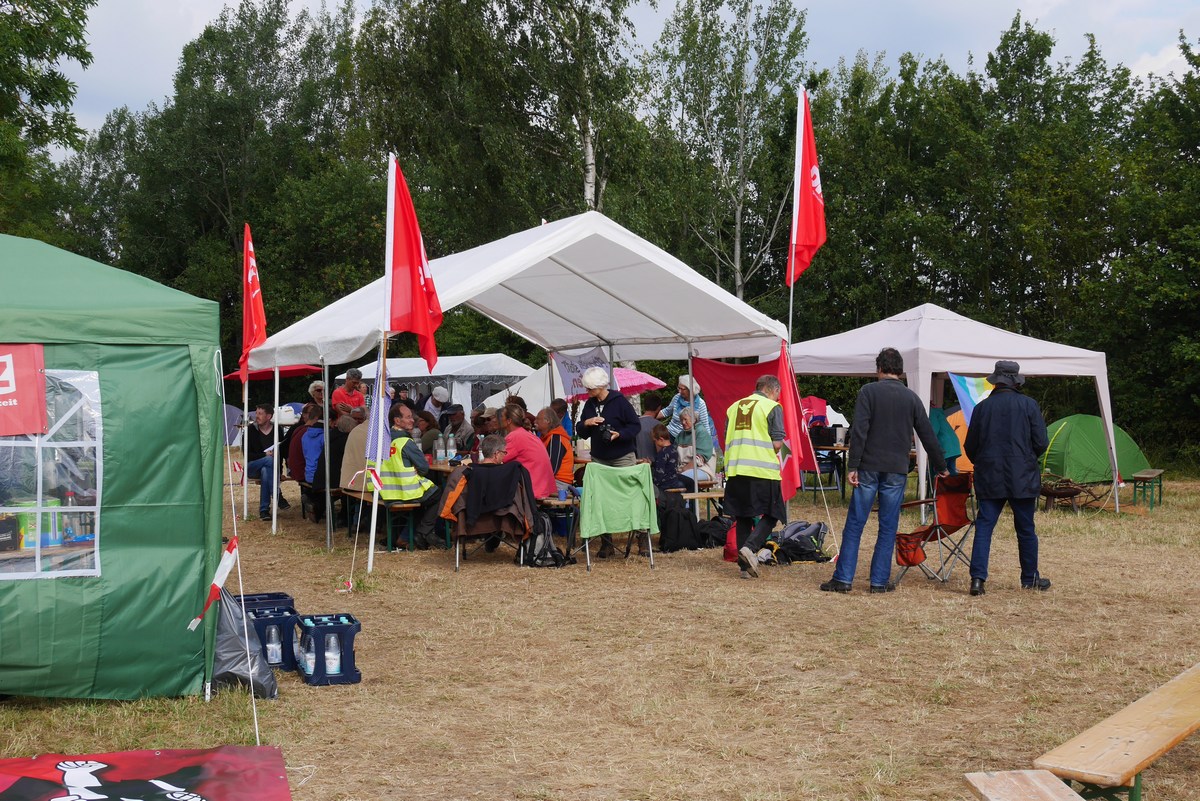 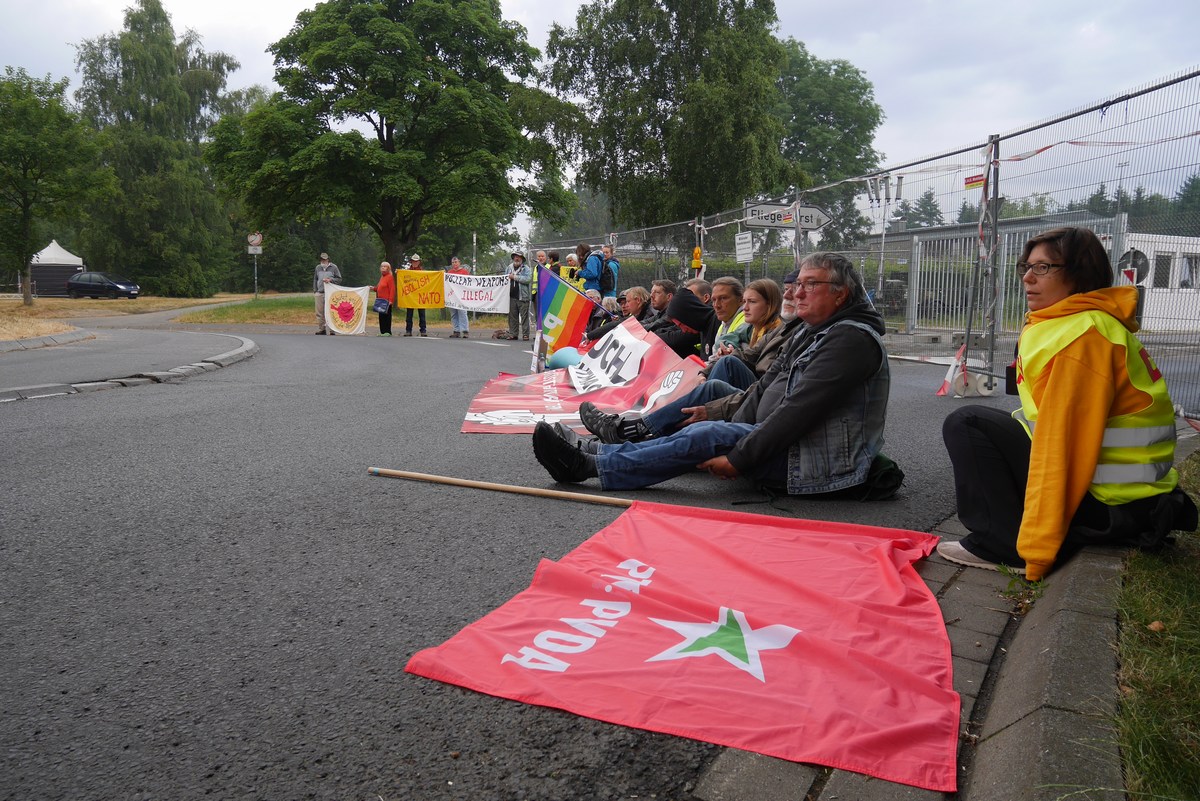 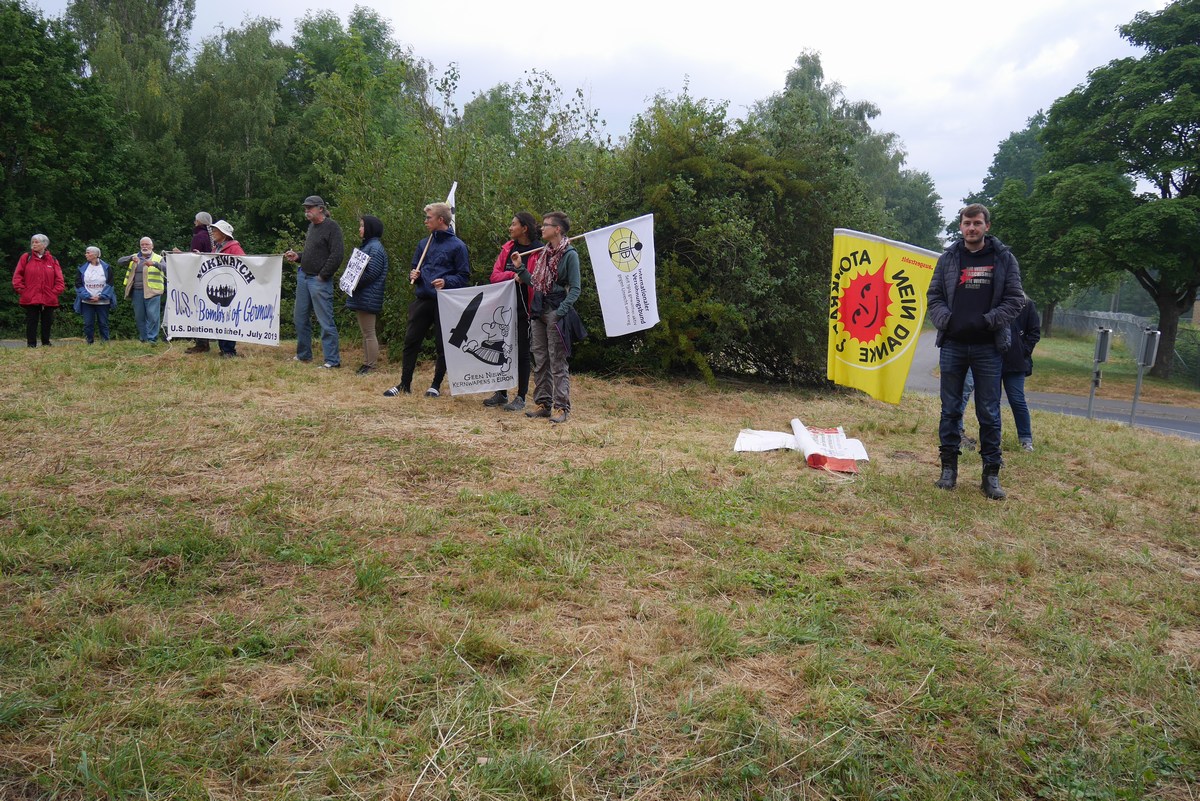 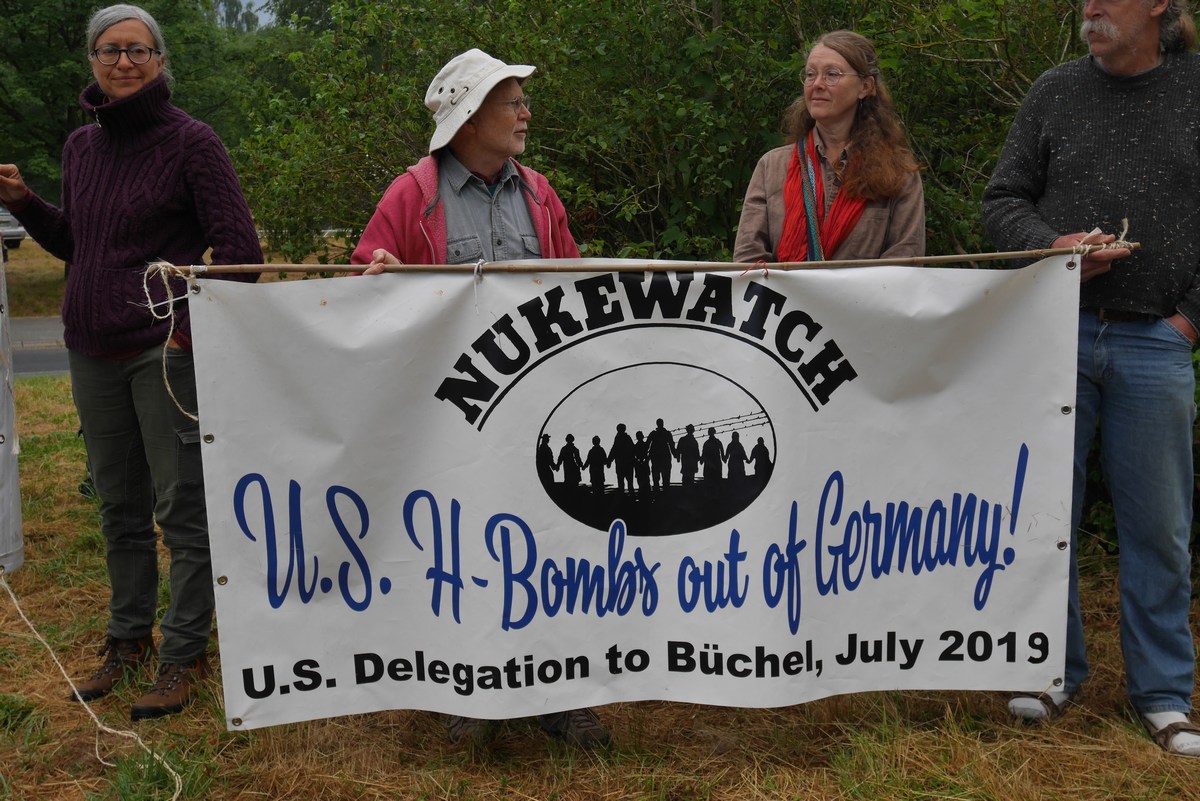 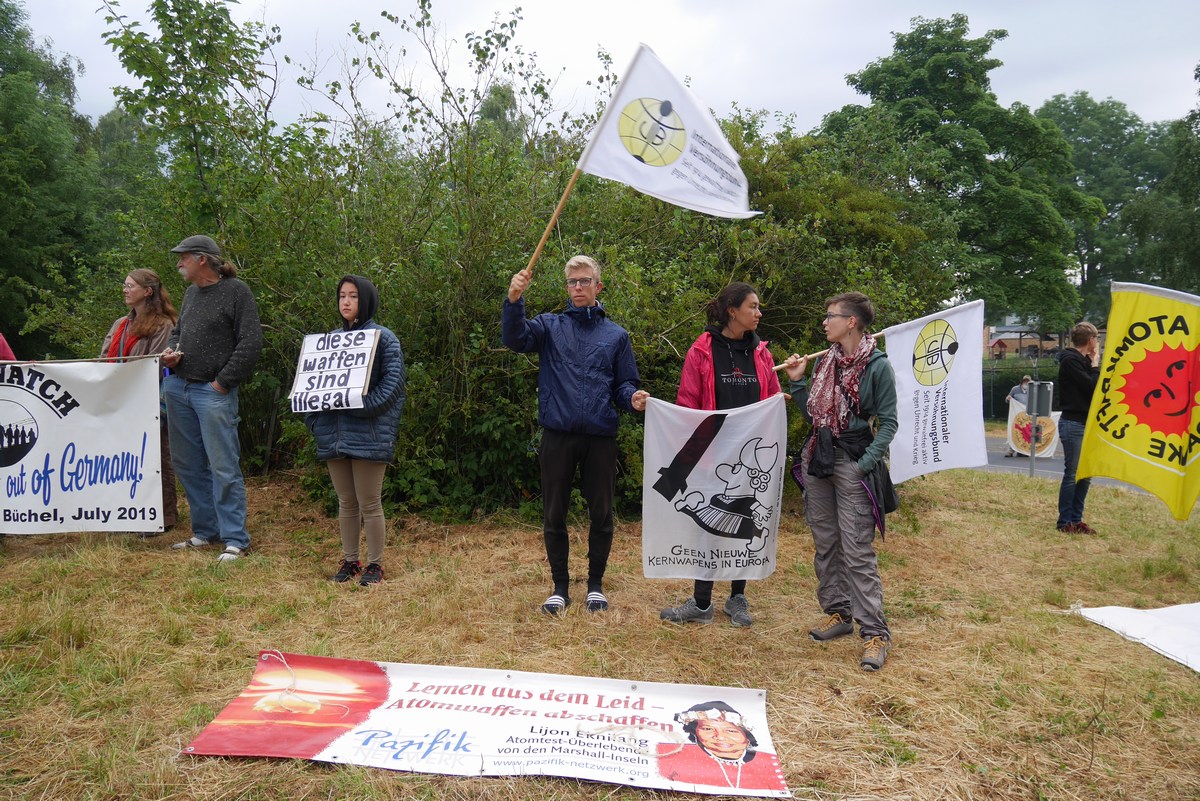 My primary idea was to map the appearance of the camp, to offer a written record as evidence that it exists, or existed when thinking of a future heritage perspective. I will get to that in a minute in more detail, but first I would like to built some more on the idea of different groups within the camp and the consequence of their materiality. When I did my first tour around the Peace Camp that Friday morning, it was full of protest-sings made by the different groups.

A recurring symbol was the rainbow-colored flag with the word ‘Peace’ in big capitals in its centre, sometime written in other languages. There were several of these flags set around the camp and visible from the agricultural road on its southern border. The same night as my arrival, members of the German communist political party (DKP) had also settled down and used the morning to add large numbers of deep red flags with hammer and sickle symbols to the campsite. I counted at least ten of these flags before loosing count, but there might have been more than 20, which were now colouring most of the campsite dominantly red. For me as a newcomer this was uncomfortable. The gentle and colourful feel of the diverse and peaceful protesters group was engulfed by an out of balance amount of dominantly red communist flags. The fact that the two groups hardy mingled during the weekend did not add to the integrity. That I was not alone in my perception was shown shortly after when other peace-activists tried to reinstate balance by adding more rainbow flags at the camps outside perimeter. It seems clear that material culture also has a relationship to power balance even within an diverse activist community striving for the same goals. 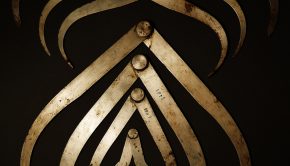 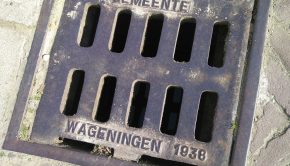